Argentina's markets, caged by controls, strain beneath the surface

BUENOS AIRES (Reuters) - Argentina’s volatile markets look to have been tamed by capital controls imposed by President Mauricio Macri after a sharp sell-off in August. Beneath the surface, however, signs suggest trouble is brewing.

That tamed the volatility of the peso and sovereign bonds and staunched an outflow of dollars, as investors await the outcome of an Oct. 27 general vote and size up the likely policy stance of opposition front-runner Alberto Fernandez.

However, economists say the surface calm masks tensions below, as caged markets struggle against the controls. Black market dollar trades are on the rise, banks are cutting risk with shorter-term lending and key fiscal targets look shaky.

“We are in a moment of tranquility but things are happening beneath the surface that reveal the imbalances,” said Alejandro Rodríguez, Buenos Aires-based director of the Department of Economics at the University of CEMA.

“There’s an internal pressure, and it’s hard to see it being released gradually.”

Since the Aug. 11 primary, increasingly risk-averse banks have started to turn toward shorter 1-day debt instruments known as “pases pasivos”, similar to reverse repos, in their financial dealings with the central bank.

The volume of these “pases” has climbed above 150 billion pesos ($2.65 billion) from almost nothing at the start of August. The volume of longer 7-day Leliq notes has edged down, though it remains the dominant central bank instrument.

Argentina, which agreed to Spartan fiscal targets when Macri struck a $57 billion deal with the International Monetary Fund last year, faces rising uncertainty about meeting its targets, as he tries to soften the blow of economic turmoil by boosting payments and cutting taxes.

This has prompted some ratings agencies such as Moody’s to cut their forecasts to reflect how the country will struggle to meet its fiscal obligations next year, central to its critical ongoing relationship with the IMF.

“We think that fiscal consolidation will become harder and less likely, leading to larger primary and fiscal deficits than previously anticipated,” Moody’s said in a recent report. 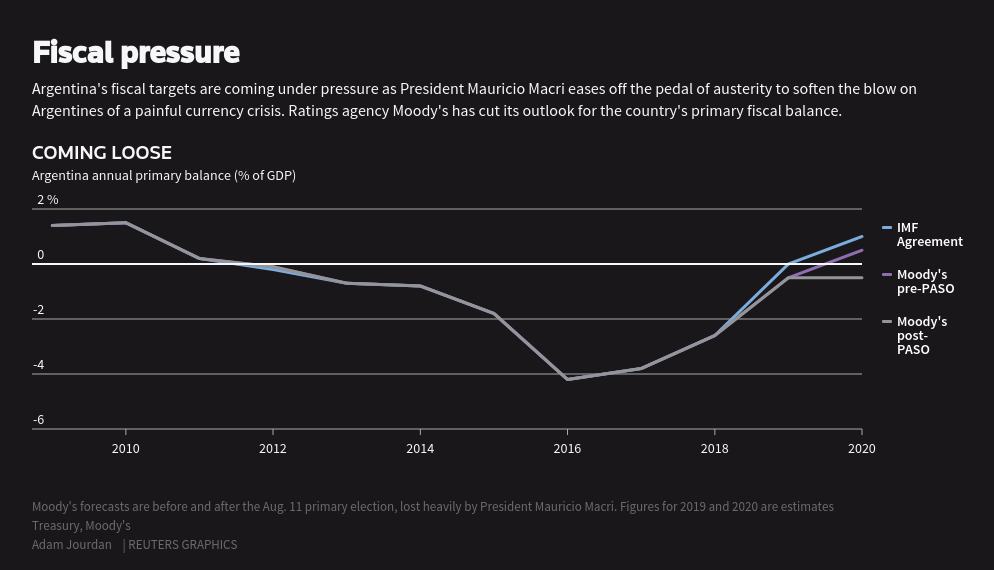 Currency controls, which have put limits on forex trades, have prompted growing demand for greenbacks in the unapproved parallel market, as well as channels using the buying and selling of bonds to convert pesos to dollars.

This has led to a rising gap - currently over 11% - between the official spot rate ARS=RASL and the dollar price in the black market, underscoring the market tension as people turn to informal channels. 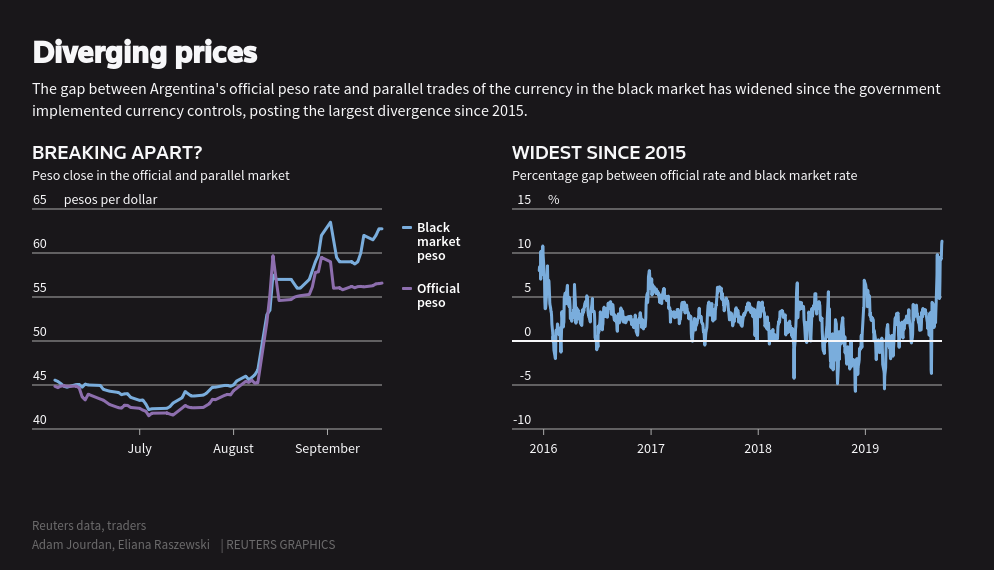 Currency controls have helped stem a sharp drop in central bank forex reserves, which are down to the lowest level since last year, raising concerns about Argentina’s ability to service its dollar debts.

“Adverse psychology is latent and in the face of any spark, we all go out to protect our savings,” Victoria Giarrizzo, an economist at Elypsis, told Reuters. 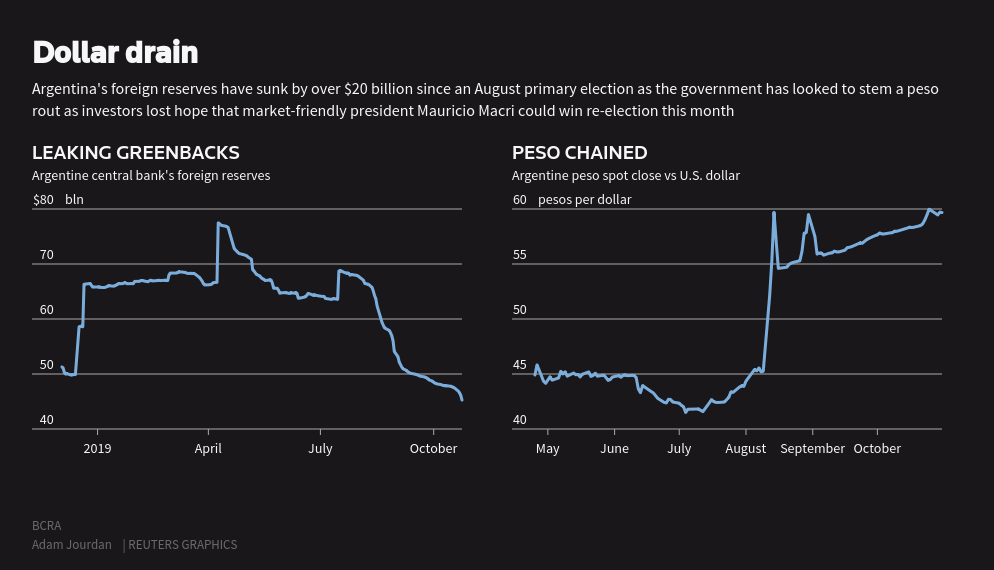 Even as global central banks cut rates to bolster growth, Argentina has been forced to hike its benchmark rate to over 80% since the August crash to help keep investments in pesos and to help keep down inflation that accelerated again in August.

Constantino Hevia, professor of economics at the Torcuato Di Tella University, said the country’s political leaders would likely avoid stoking volatility further ahead of the election.

“If they make incendiary statements, the next government could receive a broken central bank,” he said. 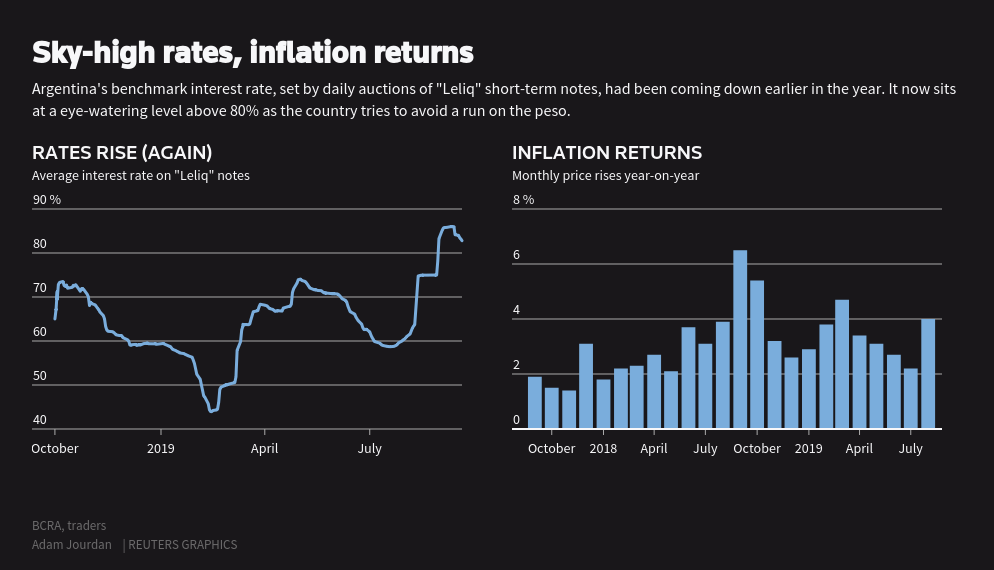